Historian and Honorary Member of the 504th Parachute Infantry Regiment, the 504th PIR Association, the Colonel Reuben Tucker Chapter of the 82nd Airborne Division Association and the (closed down) South Devon Branch of the Normandy Veterans Association

I was born and raised in Arnhem, the Netherlands and grew up in the 1980s and 1990s hearing the WWII stories of my paternal grandfather, who lived in Arnhem during the war. I was able to interview him later extensively on his experiences as a civilian during the Battle of Arnhem. A scene that haunted him for years was the sight of two dead British paratroopers on the Utrechtseweg in the afternoon of 19 September 1944. Author Robert Kershaw included part of my grandfather's recollection about it in his book 'A Street in Arnhem' (Casemate Publishing 2014) on page 127.

Seeing the film 'A Bridge Too Far' at age 9, reading the book with the same title a year later and visiting the Airborne Museum numerous times as a child and young adult certainly helped to make a decision while in high school to study history.

Contacting British veterans from the South Devon Branch of the Normandy Veterans Association and later also of the 504th PIR and other units made me much more aware of the lasting impact of the war. Those who survived the war were scarred for life - they had survived sometimes numerous battles and returned home, but had lost at least one close buddy along the way. "We are no heroes," they all said. "The real heroes are those who fell in battle or are still missing in action."

Operation Market Garden in September 1944 certainly has been my main point of interest for many years. Over 35,000 airborne soldiers and the entire British Second Army invaded the Netherlands to liberate my home country from the Nazi occupation. It has been called 90% succesfull by some people, including Field Marshal Bernard Montgomery. I still want to learn more about WHY it failed. The outcome should have been different. 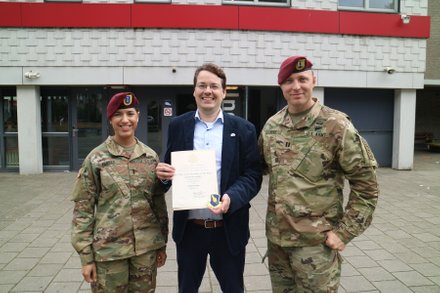 Current research focusses on a series ofin-depth articles on the Battle of Arnhem in September 1944. In these articles, to be published in the Arnhems Historisch Tijdschrift (local newsletter of the Arnhem Historical Society), the fighting in Arnhem itself is discussed in the different town parts. Using letters, diaries and earlier correspondence by the author with eye-witnesses, a full reconstruction is created from British, Dutch and German side of the battle.

To inquire for possibilities of a lecture on the Battle of Arnhem, Operation Market Garden, the liberation of the Netherlands or the 504th PIR, please contact me at info@frankvanlunteren.com

In March 2017 I presented three copies of an updated and illustrated Roll of Honor of the 504th PIR to the 504th PIR Association, the 1st Brigade Combat Team (504th PIR) and the 82nd Airborne Division Museum to use when next-of-kin of fallen WWII paratroopers want to know more about their family members. My research on the KIA's and MIA's still continues. If you have a question on your relative in the 504th PIR, please contact me at info@frankvanlunteren.com